The Styrian oil pumpkin has been sustainably cultivated on the fields of the Fleischacker family for many years and since then has repeatedly taken the gold medal for „award-winning Styrian seed oil plant“, which complies with the highest standards.

The manual production of pumpkin seed oil began many centuries ago in Austria.
The oil was used exclusively as a medicine and could only be sold in pharmacies. Its value was equated to gold.

Therefore, natural pumpkin seed oil, which has an almost black hue, is called “green gold” from Austria. It is healthy, high in fiber, high in vitamin E, contains 30% polyunsaturated fatty acids and is allergen-free.

No other food is as intrinsically linked to Styria as Styrian pumpkin seed oil.
Therefore, in 1996 the European Commission approved the protected geographical indication “Styrian pumpkin seed oil” for the Styrian Küriskern oil, according to the then valid VO, thereby protecting its origin, cultivation from harvest to pressing and selling.

Thus, the “Styrian pumpkin seed oil g.g.A” is one of the best-controlled, most exclusive specialties with European origin protection alongside such well-known products as champagne, Prosciutto di Parma, Greek feta cheese and Nuremberg gingerbread. 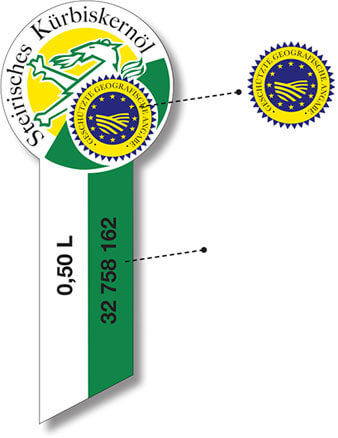 THE BANDEROLE SECURES THE ORIGINAL